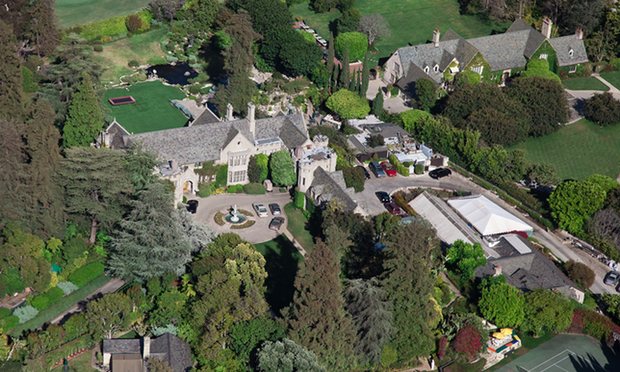 There are some things so weird that they can’t have been made up. Among them is news that Hugh Hefner’s Los Angeles mansion — AKA The Playboy Mansion —  with its multiple hot tubs, saunas and grottos, has been sold for roughly $200 million to the billionaire owner of Hostess Twinkies and Pabst Blue Ribbon Beer.

Daren Metropoulos, 32, Hefner’s next door neighbor, plans to conjoin the two property when he’s able to do so – when Hefner dies. Until then, Metropoulos will be owner but not resident of the iconic near-palace which, as he told The Wall Street Journal, has a heritage that “transcends its celebrity.” He declared that “to have the opportunity to serve as its steward would be a true privilege.”

While it’s true that somebody had to buy Hef’s place, it’s more than ironic that the deed was done – and a deed will be signed by – the owner of a cupcake franchise that lent its name to young gay men, a man who also owns a beer that’s long been popular particularly in the American Midwest. A beer baron buying the home of a man whose tastes, and budget, must certainly have been champagne-oriented for well over half a century!

Corporate America never ceases to amaze those of us who waste time observing their who’s-buying-who antics.

The latest news is, Verizon, a monster phone-service provider with an idiotic name, is interested in purchasing Yahoo, an internet company with a catchy (but stupid) name and not much else going for it. (Even less today than yesterday: Yahoo just announced that 15% of its staff will soon be counted among the unemployed!)

Verizon has pretty high rates for the cell/mobile phone service it provides. One of the reasons is that, nearly all day every day, a staff member is stationed inside each store’s door to greet incoming potential (or actual) customers, enter some information about them into a fixed or hand-held computer terminal, then advise the potential or existing customer that ‘a salesperson will be with you in a minute’ — that often turns out to be way longer than ‘a minute’.

As cell/mobile phone providers go, Verizon is a pretty reliable one. Their coverage in the U.S. is greater than anyone else’s, and their service reliability — meaning they neither drop calls nor simply drop service very often.

Yahoo is, and long has been, an internet entity offering a mish-mash of mostly useless information and infomercials as well as an email address that is not considered to be, by many, more than a fraction more ‘valuable’ than Prodigy’s.

[Full disclosure: I have, among my nearly half a dozen or so email addresses, one that ends @Yahoo.com. And back when it was the original and only online news and information service (before the 1993 dawn of the World Wide Web and the internet as we know it), I had the pleasure and honor of working as a news editor at Prodigy. We worked mainly with news from wire services, but we occasionally had to reach out to someone for some detail on a story. Almost always, on those calls, we had to spend a couple of minutes trying to explain the concept of ‘online’, something nearly no one, except those of us working there or receiving our online service, had any concept of. It’s hard to get my head around the fact that every so-called ‘millennial’ has grown up, from the git-go, in an era when online was on the radar. I grew up before television was!]

Far more than you realize, what we do today is significantly influenced by the likes of Verizon — and, to an even greater extent, Google. Our actions are monitored. Our interactions with others — individuals and companies — are tracked in a scary assortment of ways, and these companies keep gobbling each other up to create, names aside, giants like the pharmaceutical monster GlaxoSmithKline, once, not all that many years ago, a whole bunch of smaller companies. (Check the Wikipedia reference. Answer, for yourself, the question ‘what’s one of the leading instigators of drug price increases’, and define, in your mind, the word ‘monopoly’.)

I write from the perspective of one who’s worked in, and abhors, Corporate America. It’s a soul-devouring overseer of the lives of a significant number of your friends and, possibly, family members.

On the surface, I can’t imagine two less, or better, suited entities that Verizon and Yahoo. Both lack any interest in the feelings, budgets, and real interests of those who use their services. Both represent, in somewhat different ways, what’s wrong with this ‘thing’ we call Corporate America. Big businesses. Too-big-to-fail financial institutions.

These mergers of monsters should be stopped.